Home » Is the Cinnabon Franchise a Good Investment?

Is the Cinnabon Franchise a Good Investment? Since its inception in 1985, the Cinnabon bakery has expanded to over 55 countries, with over 1700 locations. Though the bakery industry’s growth has declined in the last five years, it is expected to grow significantly in the next five years in the US market. Cinnabon franchise bakeries typically generate a large portion of its revenue from the sale of coffee and other beverages. Its vision is quite simple – to be a global player in the snack industry and a best-in-class bakery and coffee shop franchise serving baked goods and specialty-blended beverages in over 55 countries.

Customers can buy cinnamon rolls by the slice or whole roll, as well as other baked goods and coffee beverages. Cinnabon Bakeries are typically staffed by outgoing, friendly team members who enjoy interacting with customers. If you are interested in such a franchise, please read the following article.

What is the Cinnabon franchise?

Cinnabon’s first bakery focused solely on cinnamon rolls, with a sign proclaiming “World Famous Cinnamon Rolls.” It opened its first franchise location in August 1985, just outside Philadelphia at the Queen of Prussia Mall. In 1990. Cinnabon owners excel in the food service industry and enjoy giving back to their community. The company believes in working together to help you be successful and happy every day.

It provides the following Franchise Partners the bakery franchise opportunities including

Efficient, customizable Bakery designs to maximize return on investment Access to a passionate and dedicated Franchise Support Team. As the Cinnabon brand was promoted through various venues, the company focused on being diverse and flexible, with multiple options for franchisees. To assist us in meeting our objectives, the Cinnabon brand assembled a team of experts in operations, marketing, development, and training.

Cinnabon, LLC, a bakery company founded in 1985, owns and operates cinnamon roll bakeries around the world. The Cinnabon, LLC headquarters are in Atlanta, Georgia. The company provides It sells cinnamon rolls, as well as other baked goods and beverages. Franchised locations are located in high-traffic areas such as shopping malls, airports, train stations, travel plazas, entertainment centers, academic institutions, and military establishments.

An open floor plan in a Cinnabon Bakery allows customers to see the baking and decorating process. Customers who want to eat in the bakery can do so as well. Cinnabon locations can now include universities, gas stations, rapid transit stations, casinos, and amusement parks.

Facts You Should Know on Cinnabon Franchise

There are some lesser-known facts about owning this franchise that you may not be aware of. For example, did you know that you are required to sell a minimum number of cinnamon rolls each day? If you fail to do so, you may be subject to a fine. Also, the baking equipment used to make the cinnamon rolls is very expensive and must be regularly maintained.

FOCUS Brands Systems and LLC’s wholly owned subsidiary is Cinnabon Franchisor LLC. As of December 2017, there were over 1,200 Cinnabon bakeries in 48 countries. Its headquarters are located in Sandy Springs, Georgia, USA.

Brands under FOCUS brands are

Cinnabon® is looking for highly motivated Franchise Partners to help us expand our franchise network. Its Partners must have the following qualifications

1. Restaurant management experience as an owner and/or operator

2. A desire to own their own Cinnabon Bakery franchise and create lasting memories for their guests.

3. A desire to give back to their community

As a Cinnabon franchisee, your success will depend on your ability to create a memorable and compelling experience for your guests. To make sure you’re doing everything you can to create a positive impression, here are some tips to keep in mind.

Below are its formats, see which suits you

How much does a Cinnabon franchise cost?

According to various sources, the Cinnabon franchise cost ranges between $233,700 and $546,800 per location. The price will vary depending on the store. The net worth requirement will be approximately $300,000, with a cash requirement of $120,000.

The franchisor also suggests that they attend the grand opening of another franchisee’s bakery before opening their own. If the franchisees operate a co-branded bakery, they must also complete the initial training program offered by the applicable co-branded franchisor, as outlined in the Franchise Disclosure Document. The franchisor may hold conferences, conventions, programs, webinars, teleconferences, or training sessions on any topic related to the system from time to time.

Cinnabon provides various operational supports to their franchises, such as initial management training and on-site Bakery visits, access to the corporate management team for business review and performance analysis, and inspections focusing on quality, service, and cleanliness.

How is Cinnabon Franchise Territory Granted

The initial franchise term for full bakeries is 20 years, with the option to renew for an additional 20 years if renewal requirements are met.

What is Cinnabon Franchise Term of Agreement and Renewal?

The franchisor does not provide financing for trade fixtures, opening inventory, or anything else. The franchisor may refer franchisees to non-affiliated leasing or financing companies. Currently, the franchisee’s note, lease, or obligation will not be guaranteed by the franchisor for any lender or other person or entity.

Cinnabon participates in the SBA’s Franchise Registry Program and may modify the Franchise Agreement as needed to meet SBA requirements for franchisees to participate in certain SBA loan programs.

There are both pros and cons to owning a Cinnabon franchise. On the plus side, Cinnabon is a well-known and trusted brand, so customers are likely to flock to your store. Additionally, Cinnabon provides plenty of support to its franchisees, so you won’t be left on your own to run the business.

However, there are also some negatives to consider. For one, Cinnabon franchises are expensive to buy – you’ll need to have a significant amount of capital to get started. Additionally, Cinnabon stores require a lot of space, so you’ll need to find a location that can accommodate the store.

First and foremost, owning a Cinnabon franchise can be a very lucrative business opportunity. In fact, the franchisor has reported that the average franchisee earns over $250,000 per year.

Additionally, Cinnabon franchises are typically very well-run and operate with a high level of efficiency. This means that franchisees can often expect to see strong financial results from their investment in a Cinnabon.

Finally, Cinnabon franchises are known for their high-quality products and exceptional customer service. This makes Cinnabon a popular choice among customers.

Pros of owning a Cinnabon franchise

2. A chance to work for a world-renowned brand

3. Bakery designs that are efficient and customizable in order to maximize return on investment

4. Access to a passionate and dedicated Franchise Support Team

6. Best-in-class assistance at all stages of the real estate, design, and construction processes

8. Marketing and public relations professionals are on hand to assist you with local marketing and media.

Cons of owning a Cinnabon franchise

1. Prior experience in a restaurant chain is required.

2. The franchise fee is variable.

3. The royalty and ad marketing royalty are also variable.

4. In the Express format franchises the franchise term is only 5 years.

How much do Cinnabon franchise owners make?

What is Cinnabon franchise profit?

We shall analyze the Cinnabon franchise profit and years to return of investment.

The estimated Cinnabon franchise profit is $ 63,000 to $ 126,000 and it will take 3 to 6 years to recoup the investment.The top 10th percentile of franchise owners can recoup their investment within 3 years, whereas the average is more than 5 years.

I have considered a higher profit margin considering the full bakery and co-branding franchise formats, and higher than the mean franchise cost of $ 400,000.

Is the Cinnabon franchise Worth it?

We can gauge the franchise valuation of the Cinnabon franchise on basis of its profits and ROI also.

As estimated above, the average franchise owners take 5 years to recoup the investment. The valuation multiple of 5x of profits is seen.

Let us also see a few Cinnabon franchises for resale, found one at Bizquest. 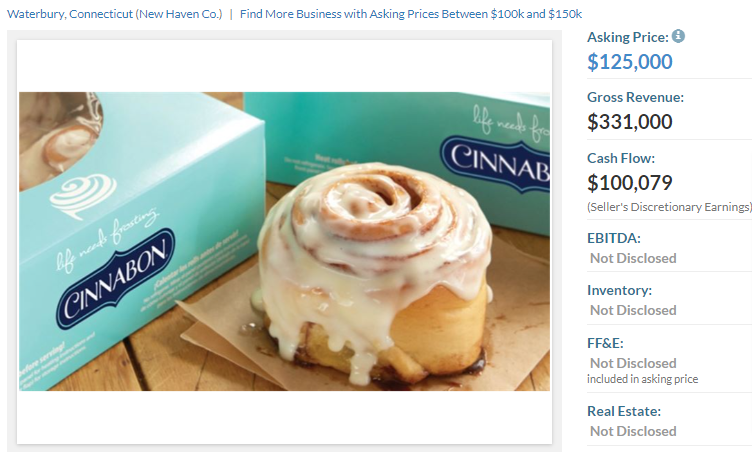 The Cinnabon franchise for sale is asking a price of $125,000 for a mall kiosk. The cost of the new Cinnabon mall kiosk franchise will be upwards of $ 250,000 and can recoup the investment in 3 to 4 years, whereas the resale business establishes a recoup period of one year.

I recommend you consider the Cinnabon franchise for resale before buying a new franchise and also talk to existing franchise owners for reviews.

Cinnabon is a world-renowned franchise that specializes in cinnamon rolls, coffee, and other sweet treats. In recent years, the Cinnabon franchise has been growing rapidly, and now operates in many countries.

1. Entrepreneur magazine’s Franchise 500 ranked it first in its category.

All I can say about 1985 is that the company has grown significantly. Currently, the company operates over 1700 stores. The company provides It sells cinnamon rolls, as well as other baked goods and beverages. Franchised locations are located in high-traffic areas such as shopping malls, airports, train stations, travel plazas, entertainment centers, academic institutions, and military establishments. The company serves baked goods and specialty-blended beverages in over 55 countries.

Bakery designs that are efficient and customizable in order to maximize return on investment Access to a passionate and dedicated Franchise Support Team. As the Cinnabon brand was promoted through various venues, the company focused on being diverse and flexible, with multiple options for franchisees. Cinnabon Bakeries typically generate a large portion of its revenue from the sale of coffee and other beverages. However, prior restaurant experience is required to obtain ownership of the company.

I recommend you to buy a franchise of Cinnabon with a savory brand from parent company-Focus brands. You can also go with Auntie Anne’s and Cinnabon together in high footfall destination zones like malls or cinemas.

The Franchise Deck rating for the Cinnabon franchise is 3.8 /5.0.

Cinnabon franchise business is a well-established business in the United States. With comprehensive training and support from the FOCUS brand, this is a fantastic opportunity for investors to invest. The company has grown significantly in the market and, as a projection of the bakery industry, has a bright future. It is still advised to speak with other franchises as much as possible in order to understand the business and make a decision.

Yes, the Cinnabon franchise is profitable.

Yes, you can make money owning a Cinnabon.

Yes, Cinnabon is a franchise.